After my disastrous hot-end meltdown, I tried to order in some parts for my Arcol hot-end. Unfortunately, Laszlo was out of parts for his hot end, so I had to go looking around for other alternatives. In the end, I bought two, with one to have as a backup. One hot-end I found is still to arrive, but this one arrived a few days ago. 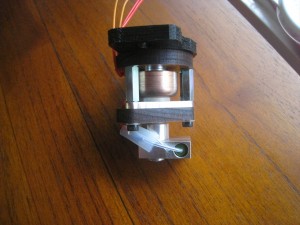 It’s the Budasnozzle, which I purchased from Lulzbot. It’s based of the Arcol design, but with some variations. It’s noticeably shorter, cutting down on the body heat-sink length, which I agree is far too long. It also uses a different type of thermistor, the slightly larger type, that looks more like a standard resistor. This type of thermistor should be much easier to replace than the ‘glass bead’ sort.

It’s very professionally built. All the parts are excellently machined, and assembled with precision, and with an eye for detail.

It’s best feature, however, is the attachment. As I’ve mentioned previously, the Acol hot-end has difficultly attaching with some extruders. The Budasnozzle has a printed base on it that has holes in the exact same locations as the extruders. So when you attach your extruder to the X-carriage, you’re also securing your hot-end. This also gives it a very large stable base to work from. An excellent approach that I think a lot more hot-ends should take. 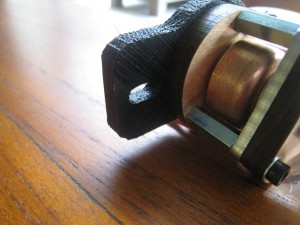 I’ll put in action this weekend and get back to printing. Hopefully, it last longer than the last one did.