With the extruder completed, the only job remaining is to hook up the extruder motor and the hot end to the electronics. The new wire-stripper made that a much easier job. 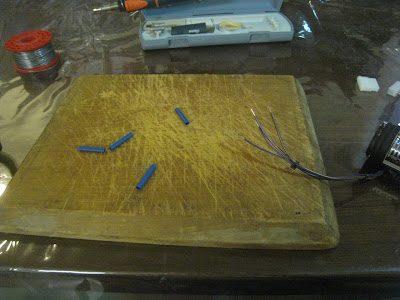 Connecting up the hot-end 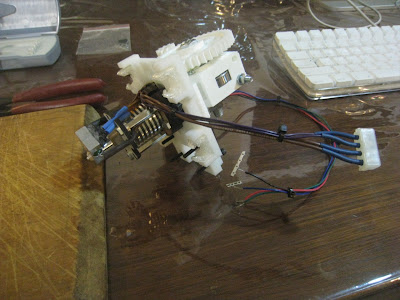 Molex connector for easy removal
One the extruder and hot end was complete, I removed the hot end, so that I could do some extrusion calibration. Whilst some default values for Wade’s extruder are known, Greg hasn’t provided any starting values for his extruder. I started out by doing some 50mm extrusions, and calibrating using Prusa’s calculator. Once that was done, I reconnected up the hot end, and put everything together. The printer was complete! 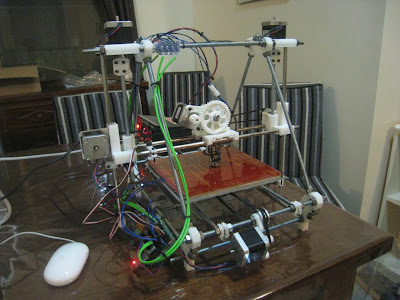 I started off by doing a few extrusion tests. They went well to start with, with the hot-end warming up, and spitting out a line of filament. I then tried to set the Z-value of the tip. Then the printer started acting strange. The Z-motors were going crazy, not spinning enough. Spinning up, then down. I couldn’t figure it out. I went to the IRC channel, but no-one was interested in helping today.

Not sure what else to do, I started fiddling with the Z-connector on the board. Sure enough, with some fiddling, the Z-motors would either work perfectly, or not at all. I took the connector off, to have a look, and discovered that one of the wires had broken inside its sheath. The intermittent connection of the wire was causing the erratic behaviour. I cut the last couple of centimetres of the cable, re-stripped and re-connected them.

The Z-nuts also kept falling out of the bottom of the Z-carriages whenever the printer was supposed to descend. I think that the problem is that the bushings are a bit too stiff, and the Z-carriages aren’t sliding smoothly along the track. To solve this problem, I glued the nuts in place, to make it easier for the carriages to come for the ride. Travelling upward’s isn’t as smooth as I would like, either. I think I’ll put a little bit of lithium grease on the Z-rods, to smooth out the travel there.

Once those issues were fixed, I tried doing a print, starting off with the standard Reprap minimug. However, I ran into more issues right away. 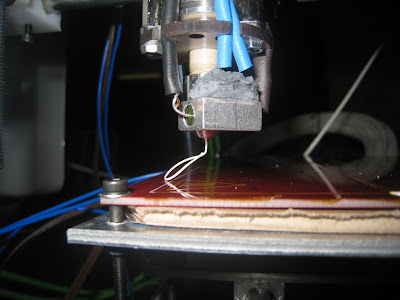 The extruder was frequently locking up. It would only turn for a few seconds before it would stop. Having a look at it, I found out what the problem was. With Wade’s design, the extruder turns so that it has the effect of loosing up the nut on the far side of the extruder. This is compensated for by using two nuts. Greg’s has the opposite problem. Because it turns in the opposite direction to Wade’s design, it tightens up the nuts. It keeps on doing this until the extruder binds up from the force of the nut.

I got around this problem by taking off the standard nuts, and replacing it with a Nylock nut that a lot less prone to movement. Hopefully, this will fix the problem. I then tried to print the minimug again. To increase the chance of success, I decided to add in a raft in the Sfact settings. The print started off badly, with the tip dragging through the kapton tape on the heatbed, due to being too low in some places, but then went to the centre of the print bed, and started printing at just the right height.

The raft went down perfectly, with sharp lines, and stacking nicely. However, after that, things starting going downhill. It started to print some of the minimug off the raft. It kept printing, but it was messy, as strands were just loosely dropped on top of each other. 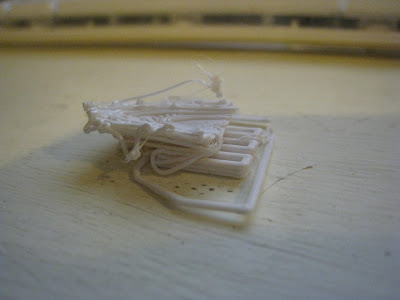 At least the raft looks good

After a while the extruder stopped extruding properly, it was hardly outputting any filament at all. At this point I stopped the print, as it was failing badly. I then had a look at the extruder, to try and nail down this problem. It puzzled me for a little while until I realised that the small gear was turning freely on the motor shaft. I tightend up the grub screw. Hopefully, it’ll work for a while. I intend to file some flats on the motors, but unfortunately, our machinist at work has broken his hand, making it hard for me to use his help.

My main problem is that the heatbed just isn’t flat, and when it’s not flat, then you can’t get the tip close enough to the bed. I also don’t like trying to set the Z-stop when the tip is so close to the bed. It takes quite a few tries to get it so that it’s ‘just right’. I’m tempted to inverse the Z-stop, set it as an upper limit, then use the software to set the lower limit of travel. That would probably work particularly well with using Nophead’s idea of the magnetic calibrator. 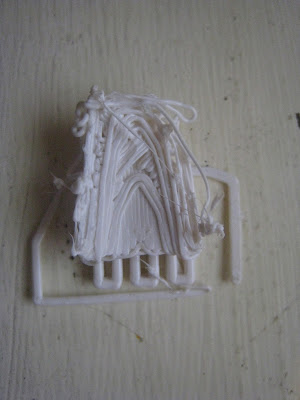 I was going to take the heatbed off, and just print on the upper steel bed, but my wife Cathy suggested that I could use one of her glass trivets. Given that it’s designed to be used as a trivet, it should be made of Pyrex. In any case, she wasn’t stressed if I broke it, as she doesn’t like it.

So after a lot of work, and a lot of problems encountered, I finally got the printer to print – something. Hopefully, I’m over the hump for the physical issues, and I can just tackle calibration for now. I think for tonight’s print, I put the minimug on the back-burner, and do a calibration cube, see how that turns out.