One of the games I really enjoy playing is called Warframe. I wrote this article for Wikia on my builds for the game. I thought I’d cross-post it here for my records.

I’ve been wanting to write an article for a while on my current Trinity builds, but I have been too lazy. I was finally jarred into action by this article on Reddit, which contained so many god-awful builds that I just had to jump in with my own (god-awful :)) builds.

Like many, I was originally disconcerted by the changes made to Trinity last year, but I didn’t join with many of the others who took up pitchforks to storm the DE offices. The usage of self-damaging Bless builds at the time was definitely unhealthy for the game as a whole and I agree that the changes needed to be made. However, since my main build at the time was Bless, I found myself a bit lost for a while, until I settled down on a new main build, which I’ll discuss below.

I love Trinity as a frame, so much so that I have eight of them (so far). At my current stats, I’ve got about 45% of my playtime with Trinity, with the next closest being at 10%. Her survivability is right up there with some of the frames that avoid damage completely, like Loki, and she can transfer most of this survivability to everyone in the squad.

I still remember the first time that Trinity ‘gelled’ for me: I was about MR8 doing a Infested survival mission with some friends. We were doing it tough, with one or the other of us going down fairly regularly. I was down in the pit that you get in the Eris tileset, completely surrounded by infested, and all the pieces of Trinity just came together for me. My train of thought basically ran like so:

At that point, I put away Oberon (my previous favourite frame), and mained Trin. I’ve never looked back. No other frame has come close to winning me over as Trinity has.

In my view, there are a few different character types.

Just about all frames will fit into one or two of these categories. For example, Banshee is a classic DPS and ‘DPS support’ frame. Irradiating Disarm Loki is ‘Individual survival’ and ‘Crowd Control’. I believe that Abating Link Trinity (as described below) covers four of these five character types, making her (in my opinion) the most useful frame in the game. Her pure self-containment makes her robust enough to take into any mission type, and also play a leading role in the squad.

Whereas previously you needed two separate frames to have an ideal EV trin and an ideal Bless trinity, these days, with Bless being less important, you really only need the one frame to handle both builds, as they have the same polarisations. This is good, as really no-one but us die-hard Trin-heads will want to have more than one Trinity in their arsenal.

A note on auras.

You’ll note in both my builds below that the aura polarisation is ‘wrong’. I like to have builds which are independent of the aura polarity so that you can use whichever aura most suits the team you’re with. You can save a couple of forma if you go with a Corrosive Projection – defined slot, but I like being able to swap out with Steel Charge, or Rifle Amp, or whatever suits the current mission you’re on (Dead Eye, anyone? Anyone?)

I thought I’d start off with an EV build, since it’s been unchanged for years. Min duration, Max range, High Power Strength. The classic Energy Vampire build will keep your squad absolutely awash in energy, but will have no survivability whatsoever, other than that provided by overshields and Quick Thinking. A single stray bullet will take you out in high-end content, since it’ll ignore QT. Your Bless will heal your squad, but have an damage-resistance duration of just over one second. 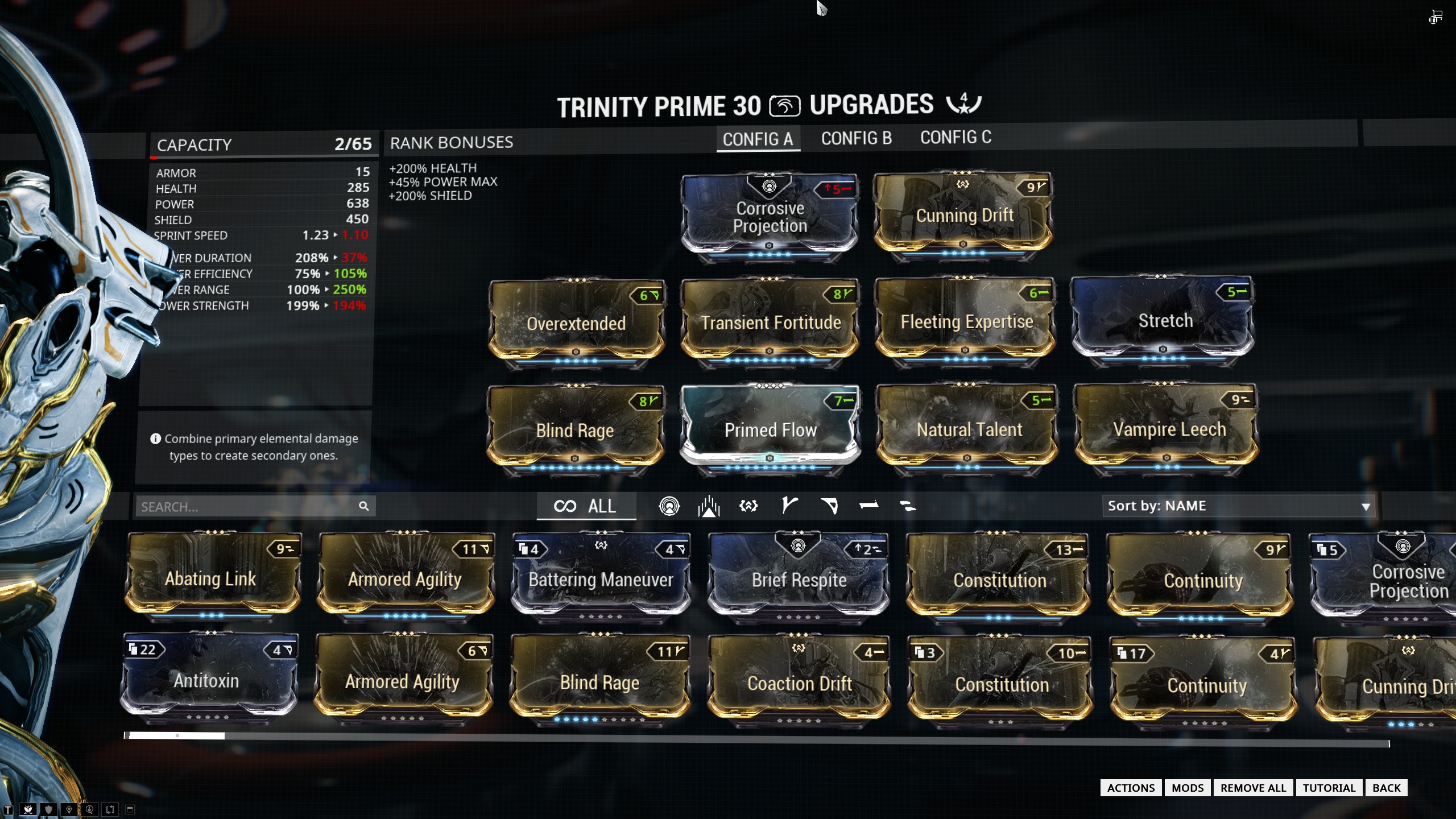 Without a doubt, it’s useful, if very narrowly focused. Fortunately, the advent of the Zenurik Energy Overflow passive has made EV Trin largely obsolete, with the exception of extremely cheesy squads.

Now on to the ‘real build’ of this article. As I mentioned above, after the Trinity nerf in mid-2016, I was a bit lost for a while on how best to play Trinity. My current Bless build still had 30 seconds of duration, but was only doing a flat 50% damage resistance. I could get it up to about 70% without losing much duration, but it just didn’t have the same useful feel as before.

An off-hand comment on Reddit provided the solution. Someone mentioned Abating Link, but said that it was only okay, as it was too compromised. Too little duration, or not enough armour strip. I set about fiddling with my builds, trying to get a good build going.

The build I eventually ended up with is fantastic (IMHO). It gives excellent duration, with 100% armour strip. A combined Link / Bless will give you 92% damage resistance – right up there with the old Bless builds, but it’s available at will, and with none of the risk that surrounded the self-damage builds. (Hands up those who died because they were stuck in a QT stagger-lock after getting hit by a mob after throwing your glaive. Thank you.)

If you haven’t experienced it before, let me say that 100% armour strip is amazing. Grineer and Corrupted just absolutely melt from underneath you. In long survivals and the like, I almost always end up with the highest damage percentage.

I take this build into all missions, including those with Corpus and Infested enemies. You may ask why, as those factions don’t have armour. A few reasons:

So here’s the build: 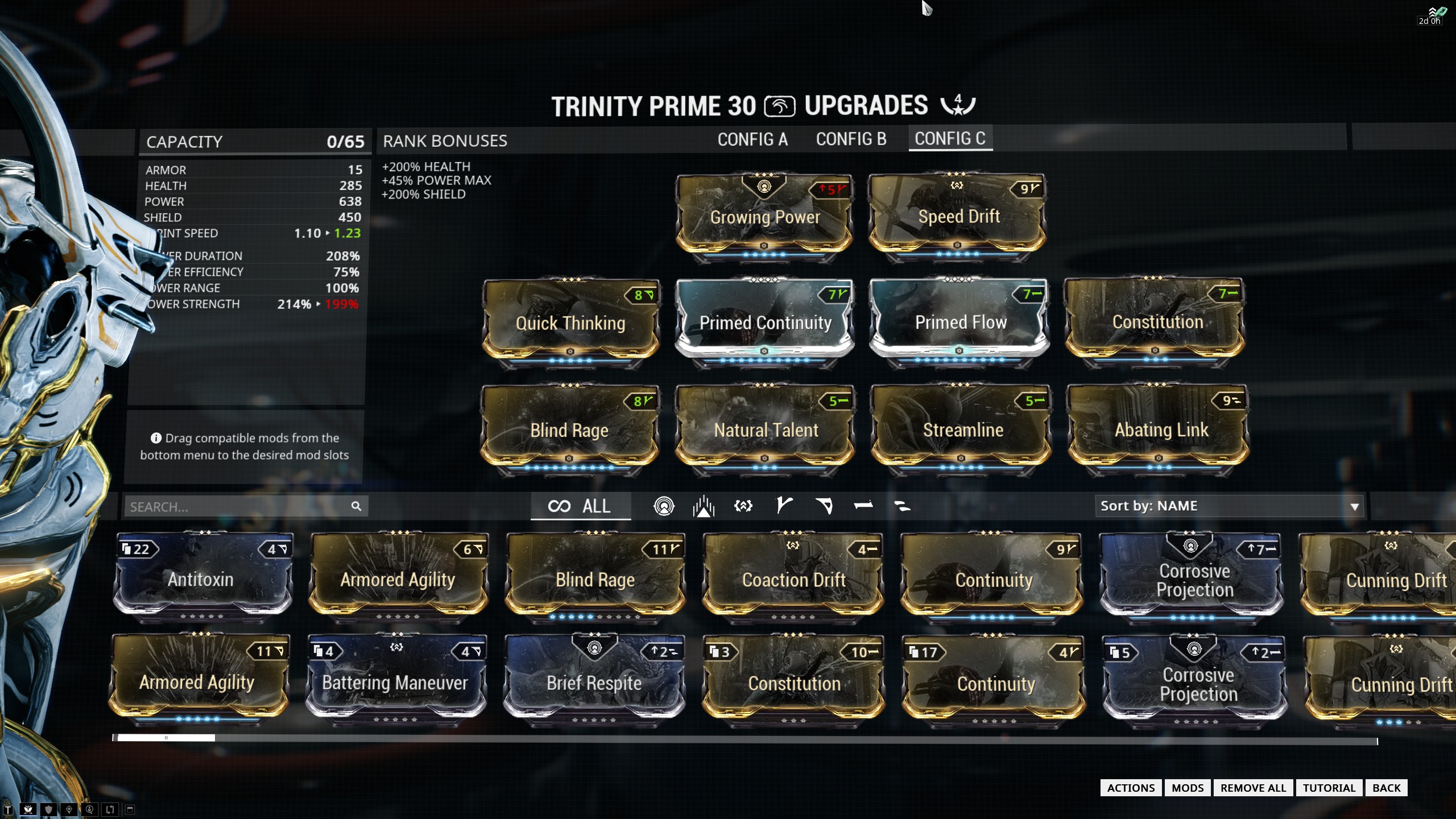 As you can see, the key is getting up to the critical 223% Power Strength that you need to give you 100% Armour Strip. This build gives 224%. On top of that is keeping the range steady and upping the duration as much as possible. Efficiency is the dump stat, since you’re Trinity, and you can recover energy at will, and the high power strength means that you get a lot of energy for each EV cast.

Abating Link: This is the linch-pin of the build. It doubles the practicality of Link, since it turns it from straight damage-resistance to damage resistance and damage-boosting, greatly amplifying the DPS capabilities of Trinity.

Growing Power: This isn’t a mod you see a lot in people’s builds, but it’s extremely useful in this one. It steps up the armour strip from a very-useful ~90% to an enemy-melting 100%. It gives you that extra 25% Power Strength that you need without taking up a regular slot. It’s easy to trigger, as you only need to generate a status proc. Since, in high-end combat, you’re almost always using a weapon with at least a moderate status chance, the counter is running all the time. (If you’re using a weapon that has no real status whatsoever, bring along Taxon, and it’ll keep growing power continually running).

It’s a fairly new mod to the game, but very useful, as it now ups the maximum possible power strength to 374%. (As an aside, once you get it, make a 374% power strength Eternal War Valkyr. It’s amazingly fun.) It’s not the easiest mod to get, but as long as you take your scanner with you on every mission, you’ll easily pick up the plant scans that you’ll need in a reasonable time-frame.

(Primed) Continuity, Constitution: Duration. Duration is good, as you don’t want to have to recast too often. With the Arcane Aura helmet, the duration for Bless is up over 20 seconds.

Quick Thinking, Natural Talent, Primed Flow: These mods are pretty straightforward, and speak for themselves. I put Quick Thinking on any frame that has >600 energy pool, as it greatly increases survivability. Natural Talent is also an essential on all heavy-casting frames.

Exilius Slot: For me, this is the only ‘variable’ slot in the build. As I see it, you have two options here – Cunning Drift for the increased range, or Speed Drift for reduced cast time. I’ve gone with Speed Drift, as casting time is critical, since you’re casting a lot. I don’t see the extra range as being particularly useful. If you’re on a big map, you’re primarily relying on Bless to give you the damage resistance you require while you close in on the enemy.

Weapons: I prefer to go melee with this build. Since you’re focussing on Link to provide you with both damage boost and damage resistance, you’re in fairly close range already. Close that gap a little further and go melee. The primary weapon that I use with Trinity is Mios. Good status chance, enormous range and great attack speed. The range and the rag-doll that Mios does gives the CC boost that Trinity needs. Another top weapon option is Lesion with its pure elemental damage and bonus toxic proc. It’s got some advantages in that it doesn’t need the ‘spool up’ time that a critical-damage weapon like Mios has. Primary and Secondary are whatever you feel like, but focus on Toxin and Slash damage. 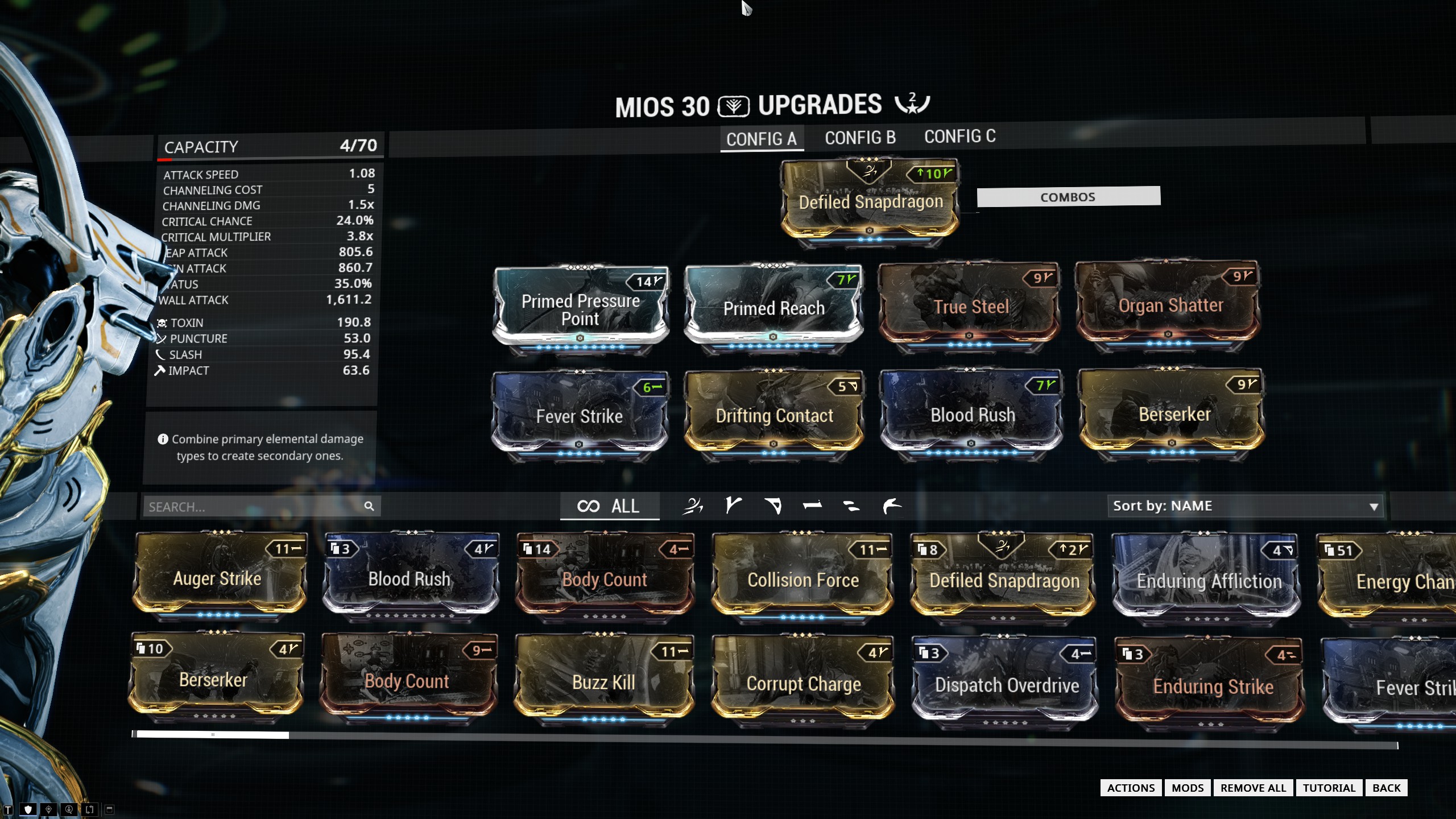 I prefer the Mios for missions in which there is a continuous stream of enemies, like Survivals, and also missions which have a lot of Nullifiers. The enormous range helps pop the bubbles safely. 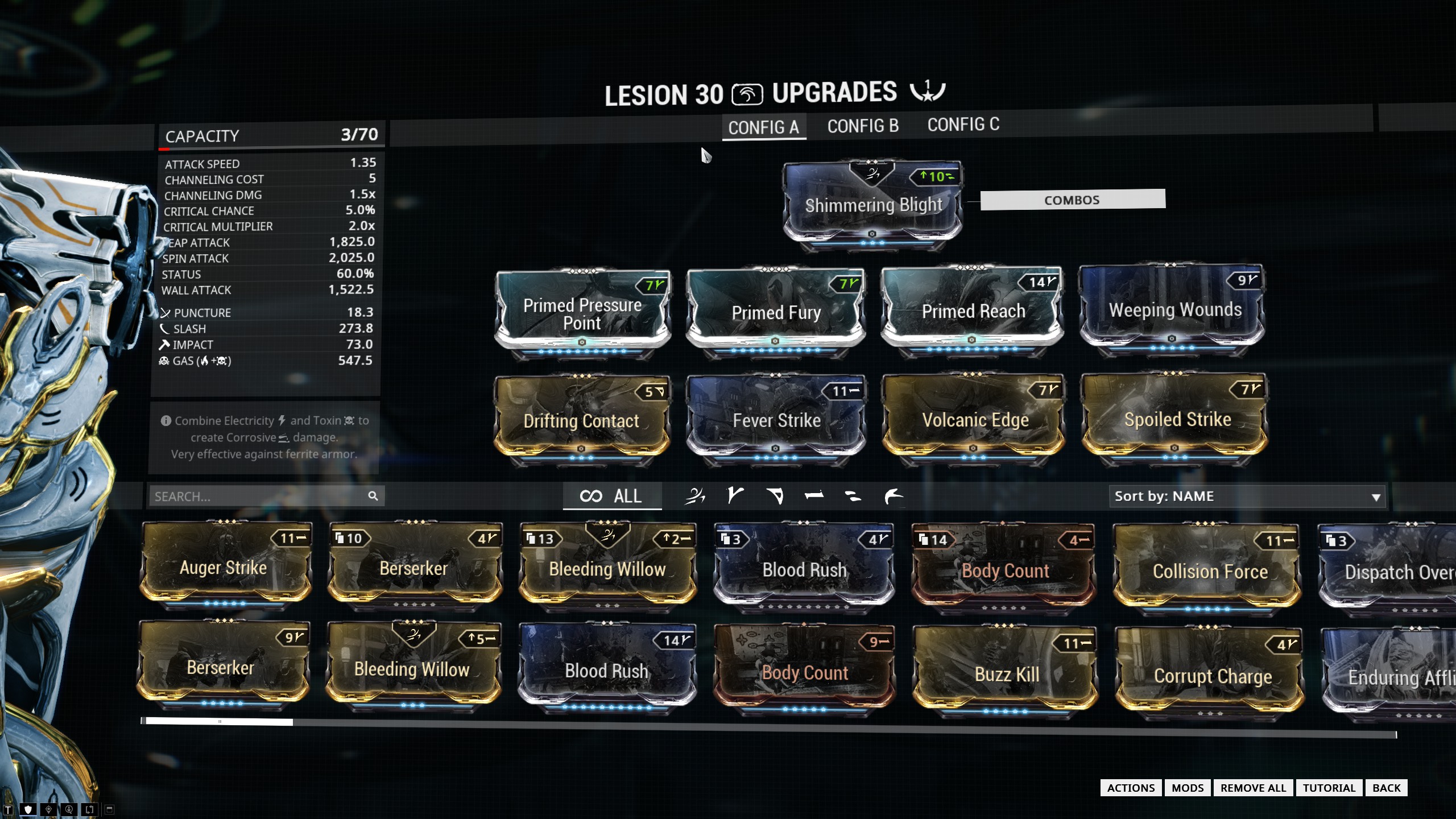 The Lesion works better for missions in which the enemies are start-stop, like Defense, where you can’t keep your combo counter up continuously.

This is a significant weakness with the build above. In an energy-reduction sortie, you’ve only got 150 energy, which is not enough to pop Link, Bless and then have enough energy left over to cast Energy Vampire to top your energy pool back up. In these sorties, I swap out the Blind Rage with an Intensify.

If you would like to try out Abating Link, but don’t want to have to sink five forma into Trinity and get Growing Power, try this build. It’ll give you 97.2% armour strip, which is great, but won’t give you those tasty red bars. 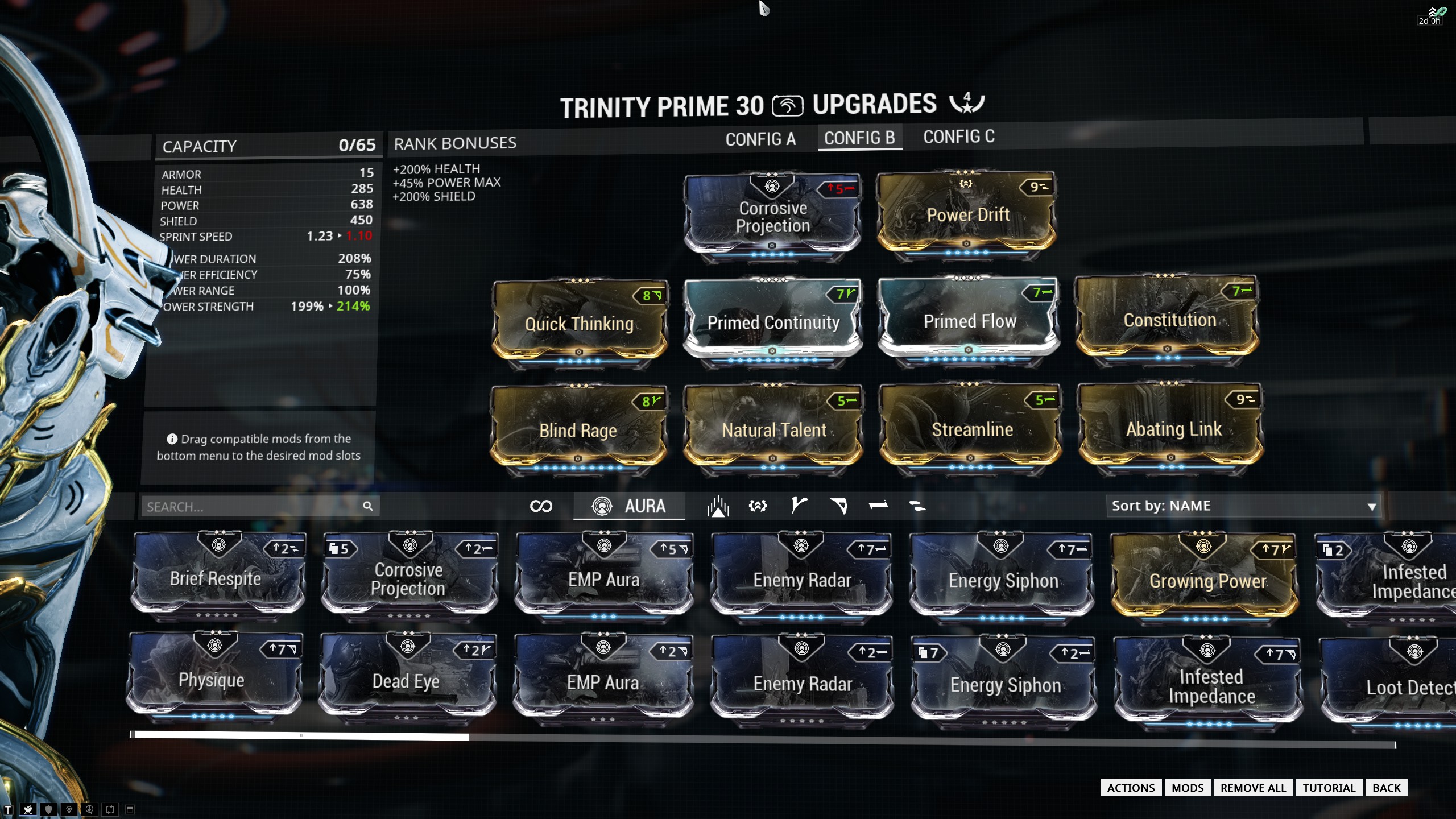 The main loss here is the 15% casting speed, and the 10% power strength.

It’s fairly straightforward. The most dangerous part of the mission for a Trinity is literally the first 20 seconds, until you can start building your energy pool. With a small starting energy and low efficiency, you don’t have enough to cast Link or Bless, and then cast Energy Vampire. So you have to cast EV first, which means getting close to an enemy without any protection. So find your first enemy, EV, then drop Link. After that, it’s pretty smooth sailing. Just keep Link active all the time, for the protection and armour strip. Pop Bless when you or your squadmates need it, and keep topped up with energy. Have fun!

Here’s a video of the build in action, versus twenty level 145 Corrupted Heavy Gunners.