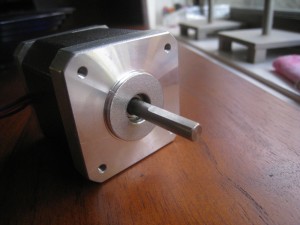 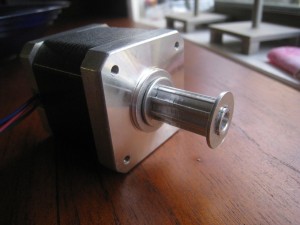 I finished wiring up the axes yesterday, so I thought I’d plug everything in and give it a test run. Just about everything worked first go!

All the endstops worked, and all the axes travelled, with the sole exception of the Y-axis, which travelled in the wrong direction. After flipping the connector around that axes was working correctly, too.

I noticed that the axes were running into their stops at the non-endstop end. I figured that the maximum travel distances were incorrect. So I measured them up accurately, then went into the firmware and made the following changes:

after which the printer then would correctly stop at these limits. I recorded a short video of the printer homing:

Once this test was done, I wired in the extruder and gave it a test, which was successful as well. I didn’t bother measuring the steps / mm for this extruder, since I’ll be changing it next week for a Greg’s Hinged Accessible Extruder.

There’s not much else I can do on the printing front until I can get the extruder and hot end sorted out, so I’ll have a look at the heated bed, try and get it set up as well.

In various classes they teach you that there’s no real difference between motors and generators, it just depends on which way the current is flowing. This short video really shows that principle, as well as the strength of these little stepper motors.

I was trying to level out the X-carriage yesterday when I noticed this effect. These motors are completely mechanically separated from each other. They’re just connected electrically, through the connector block you can see in the middle of the video. Turning one of the Z-rods turns the other, with a surprisingly high degree of efficiency.

Now that the hardware’s finished, it’s time to wire up the electronics. One annoying thing about my stepper motors is that they only have short wiring, which doesn’t allow them to reach all the way to the electronics from every location. I’ll have to extend a few wires, which will be annoying. 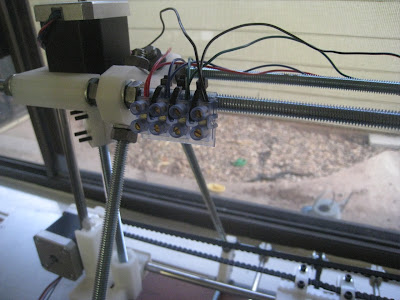 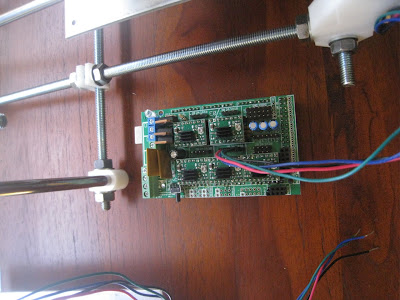 First motor connected up
I tried putting the electronics in various locations, but it turned out that the bottom-left corner had the best combination of tidiness and short cable runs. 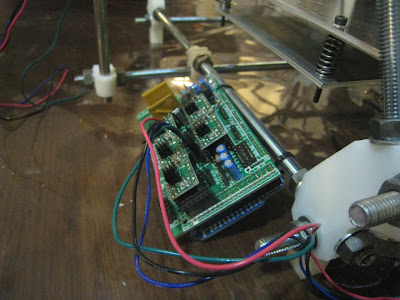 I zip-tied the electronics to the frame, to stop them from wandering. Unfortunately, it’s on a bit of a lean.  Once the printer’s up and running, I’ll print up a tidier box to put the electronics in.

The endstops were then screwed on, and attached to the electronics as well. I just need to extend the wires for the extruder and the z-motor, hook them up, and then I’ll be all finished!

Now armed with a full set of jumpers, I thought I’d try and re-create my motor-spinning test from a couple of weeks ago.

I carefully fitted all the jumpers to the shield (three jumpers per stepper motor for 1/16 stepping), then hooked up the power and started Pronterface.

Success! The motor is now spinning backwards and forwards. I’m now definitely all set to start assembling the printer over the weekend.

Since I’m still waiting for the hardware to arrive, I thought I’d try and hook up one of the stepper motors to the electronics, and try and get it to spin. Easy enough little task.

So I hooked up the power supply to the board, taking extreme care to make sure I get the polarity right on the cable. I then hooked up the motor to the extruder port, and then the electronics to the computer. I then put on one of the toothed gears on the motors, so that its movement would be clear. 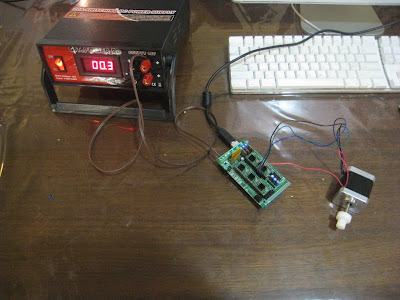 I then fired up pronterface using my little script, connected to the electronics, and hit ‘extrude’.

‘hmm’ went the motor, but with no movement. That seemed a little strange. I tried extruding a larger amount. Still no luck.

I went through various alternatives, plugging in a different motor, trying a different axis, even adjusting the potentiometers on the stepper motor drivers. No luck. With nothing else I could think of, I went to the reprap IRC channel, where there where many willing helpers with suggestions. Most of them suggested ideas that I had already thought of.

One IRC-er suggested that the problem was that I was missing jumpers on the RAMPS shield board. To check, I pried up the stepper motor drivers and had a look. No jumpers! With no jumpers in place, the board was trying to do full stepping, rather than 1/16th stepping.

Cursing Auzze under my breath, I shot him a quick email, letting him know that I was short 12 jumpers. He was extremely apologetic, and promised to quickly throw some in the post.

Hopefully the jumpers will fix the problem, and the motor will spin on command. 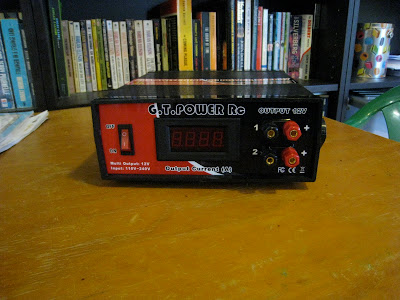 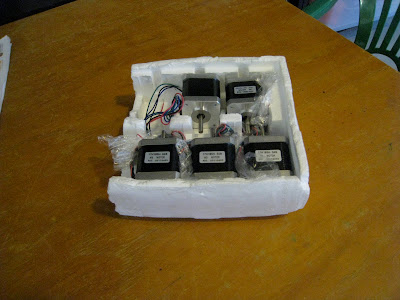